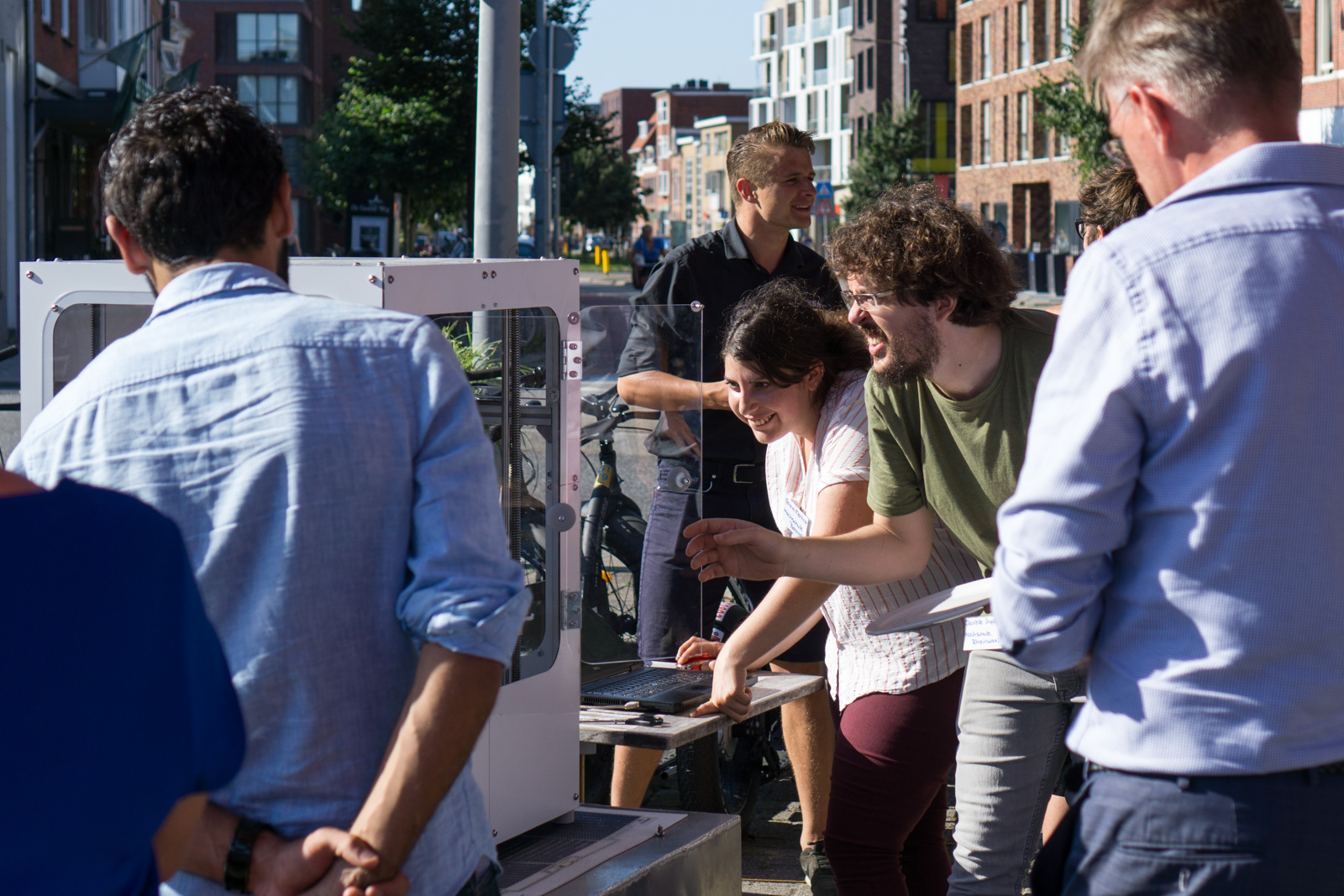 The weather and the location could not have been better. The final presentation of the FOOD2020 project Cook.3D took place at the end of August, directly on the diepenring canal in Groningen, in beautiful sunshine. The project partner Progress Events had invited sustainable entrepreneurs and decision makers to the north Dutch city to watch the results of the FOOD2020 innovation project.

A total of four German and Dutch partners worked on the prototype for a good one and a half years under the umbrella of the INTERREG programme FOOD2020. The innovation project was coordinated by GIQS. Partners were the FabLab of the Ruhr-West University of Applied Sciences in Bottrop, the companies VormVrij 3D from Afferden in the province of Limburg and EAS GmbH from Rheinberg as well as the caterer Progress Events from Groningen. The FabLab of the Rhine-Waal University of Applied Sciences in Kamp-Lintfort was associated. The special feature of the prototype developed in the FOOD2020 project lies in its novel extrusion system, which mainly consists of peristaltic pumps that use a kind of squeezing mechanism to guide the food pastes through the printer. The machine is therefore much easier to clean than comparable models and has better hygiene characteristics. For future development, the project team has decided to upgrade the printer to a multi-nozzle system. Other sensors are also to be integrated for better control of the pressure and an additional cooking area. Various intelligent command functions (voice commands) will also be added to improve the overall user-friendliness. 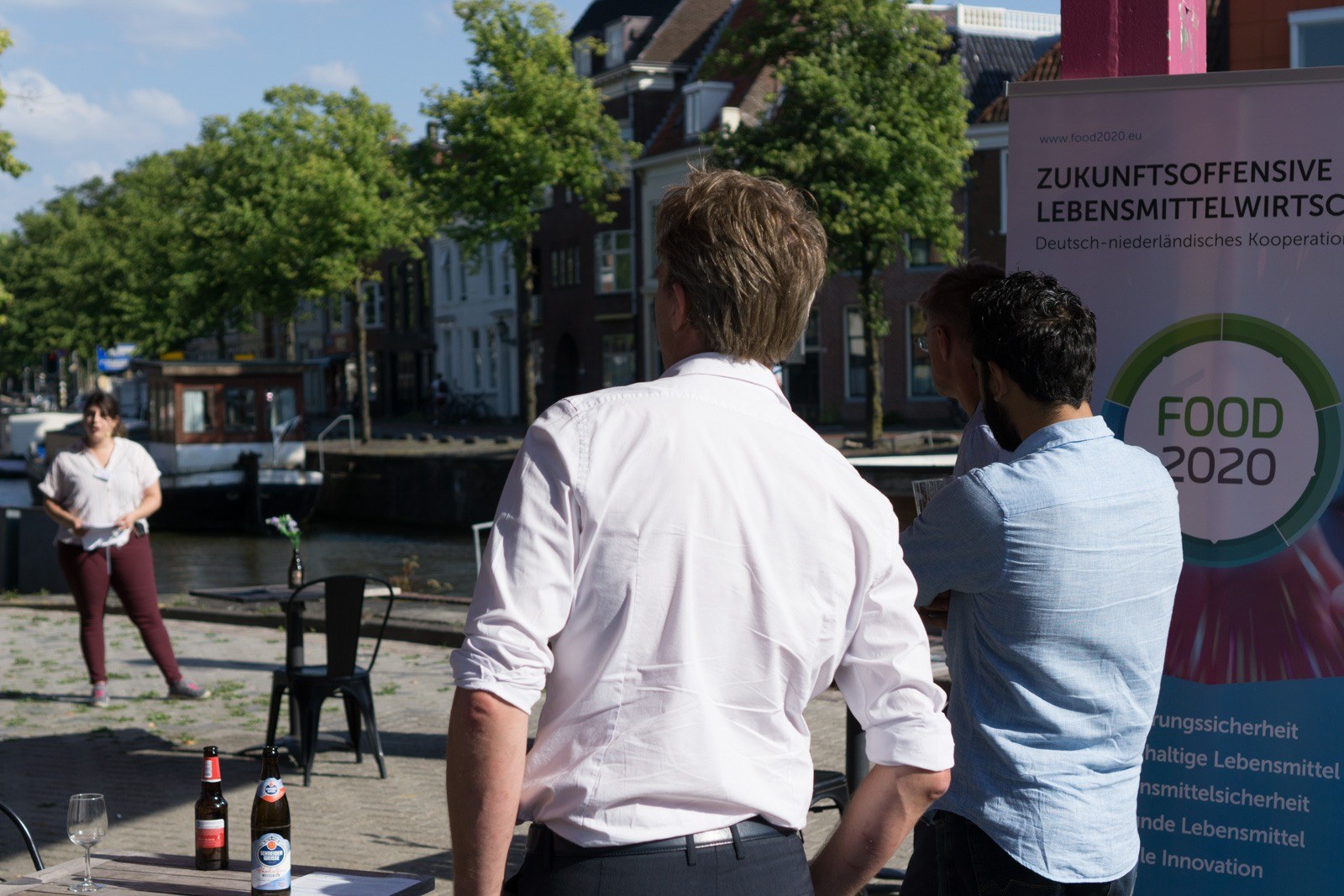 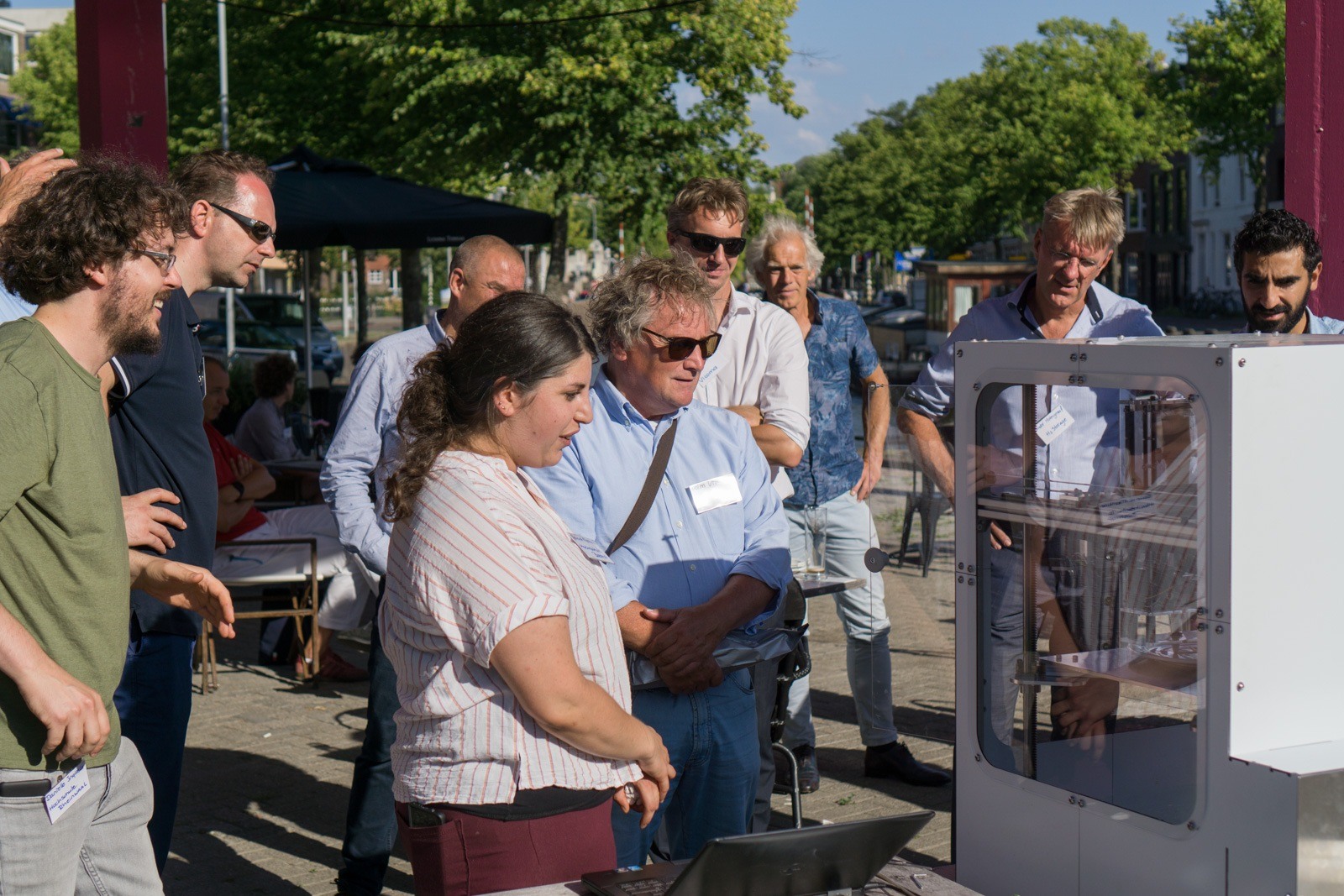 Demonstration of the printing prototype to entrepreneurs and decision-makers 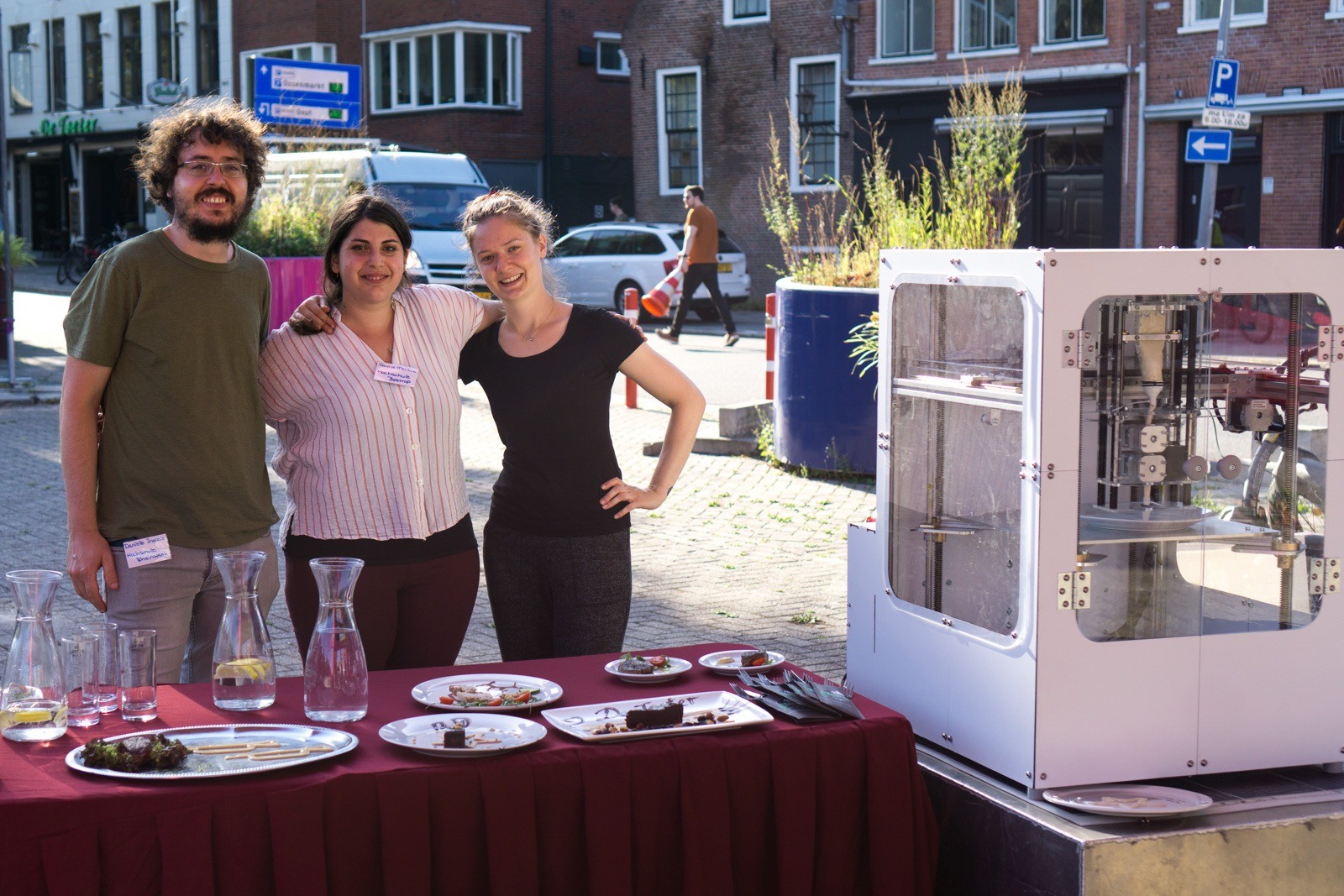 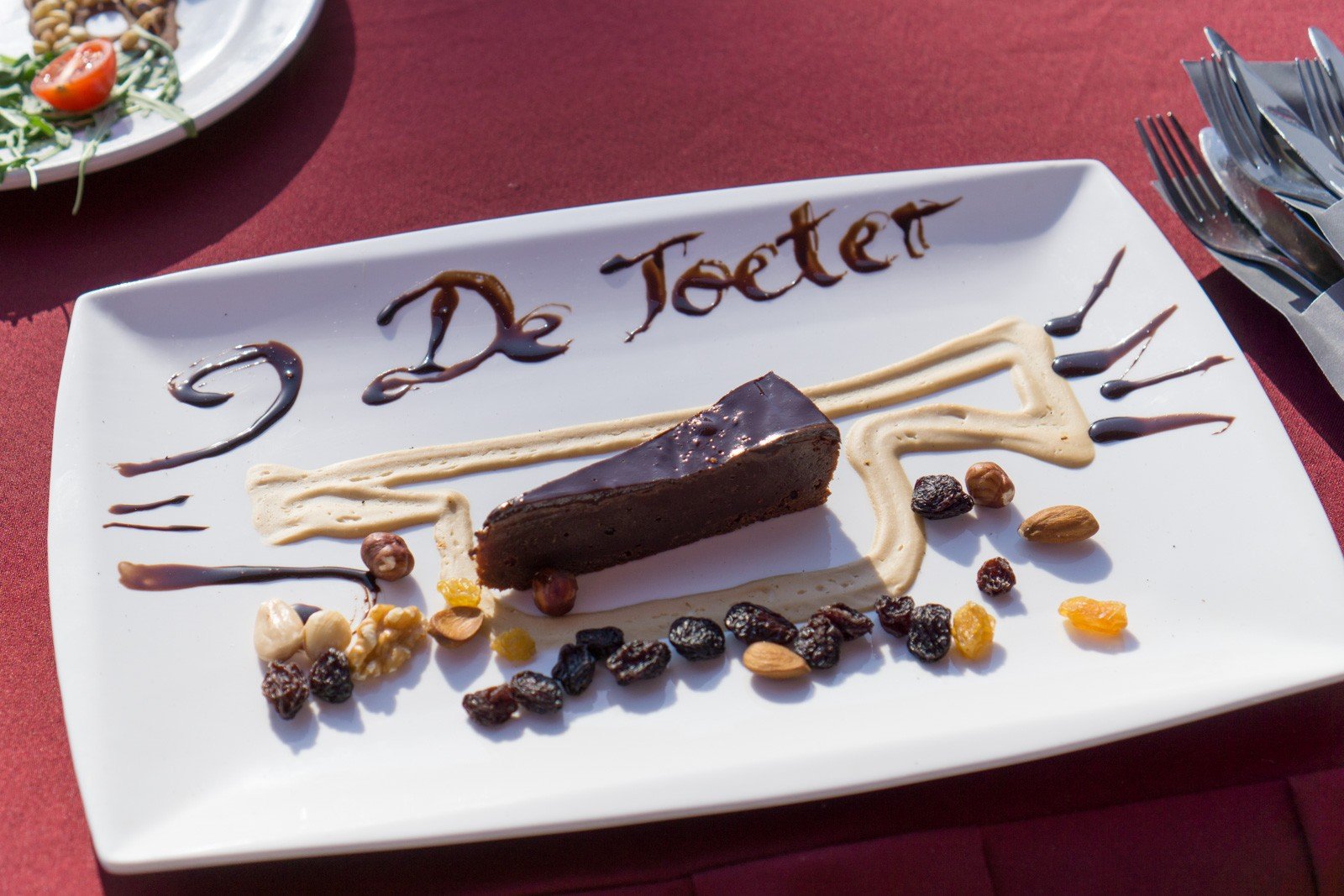 At the final presentation in Groningen, Gaia Di Martino (Hochschule Ruhr West) and Daniele Ingrassia (Hochschule Rhein Waal) demonstrated the finished prototype. They had already arrived the day before in order to develop various pastes optimised for the 3D printer (including an onion sauce, a basil sauce, a mayonnaise and a hazelnut grenache) in the kitchen of the project partner Progress Events together with the cook Aneta Sokolowska. The pastes were printed live during the presentation and served as part of the served appetizers. The Groningen event caterer Progress Events had served onion sauce on beer bread as an appetizer, which was baked with spent grains, a residual product of their own beer production. This was followed by a small steak from the old breed of cattle Blaarkop from Delfzijl with basil sauce and brander mayonnaise. For dessert the guests could look forward to homemade brownies with a hazelnut grenache made from home-brewed beer.

FOOD2020 is implemented within the INTERREG programme Deutschland-Nederland and is co-financed by the European Union, the Ministerium für Wirtschaft, Innovation, Digitalisierung und Energie of North Rhine-Westphalia, the Ministerium für Bundes- und Europaangelegenheiten und Regionale Entwicklung of Lower Saxony, the Dutch Ministerie van Economische Zaken en Klimaat and the provinces of Drenthe, Fryslân, Gelderland, Groningen, Limburg, Noord-Brabant and Overijssel. It is supported by the programme management of the Ems Dollart Region. Leadpartner is the German Institute of Food Technology e.V. (DIL) in Quakenbrück. Regional partner for the North Netherlands is NOM/TCNN.