The German-Dutch border area is characterised on the one hand by intensive agriculture and on the other hand by the proximity of large markets in the form of densely populated areas. When Europe was shocked by the EHEC crisis in Germany in spring 2011, the uncertainty surrounding the infection of vegetables caused enormous losses in the production, trade and export of vegetables. 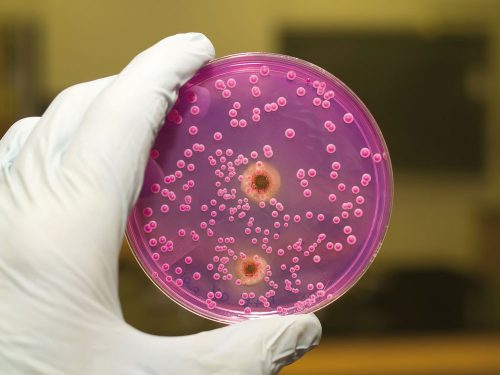 In the Netherlands, ESBL bacteria had been found in various vegetables at about the same time. ESBL stands for extended-spectrum beta lactamase. These are certain germs from the Enterobacteria family that can produce enzymes through genetic modification that render antibiotics ineffective.

During the EHEC crisis, it became apparent that there was a lack of clear cross-border communication by those responsible and of coordinated action plans, further increasing consumer uncertainty about the unrestricted consumption of certain products. In addition, the EHEC pathogens caused many diseases and deaths.

The aim of the e-H@C HUPAction project is therefore to develop a system to improve the exchange of information within the organisational infrastructure in the interests of faster detection, monitoring and control of EHEC and other human pathogenic bacteria in the vegetable value chain in the Euregio Rhein-Waal.

The “e-H@C HUPAction” project involves a total of eight partners, including research institutions, business enterprises and public authorities from the province of Gelderland, North and Central Limburg, the Lower Rhine and other North Rhine-Westphalian regions, with the aim of developing concepts and strategies for joint crisis management and communication specifically geared to the border region. New cooperations and a powerful network along the border will generally provide a new impetus for consumer protection, health care and the competitiveness of agribusiness.

The results of this regionally limited pilot project could then be applied by national institutions on a supra-regional basis.

In addition to project coordination, the main task of GIQS is to prepare and carry out a cross-border crisis exercise. In this context, an intensive exchange with the activities within the SafeGuard project is foreseen.

All activities are divided into three work packages (WPs), which in turn contain various sub-working groups:

e-H@C HUPAction is implemented under the INTERREG IV A programme Deutschland-Nederland and co-financed by the European Regional Development Fund (ERDF) and the Dutch Ministry of Economic Affairs, MWEIMH NRW and the province of Gelderland. It is accompanied by the programme management of the Euregio Rhein-Waal.