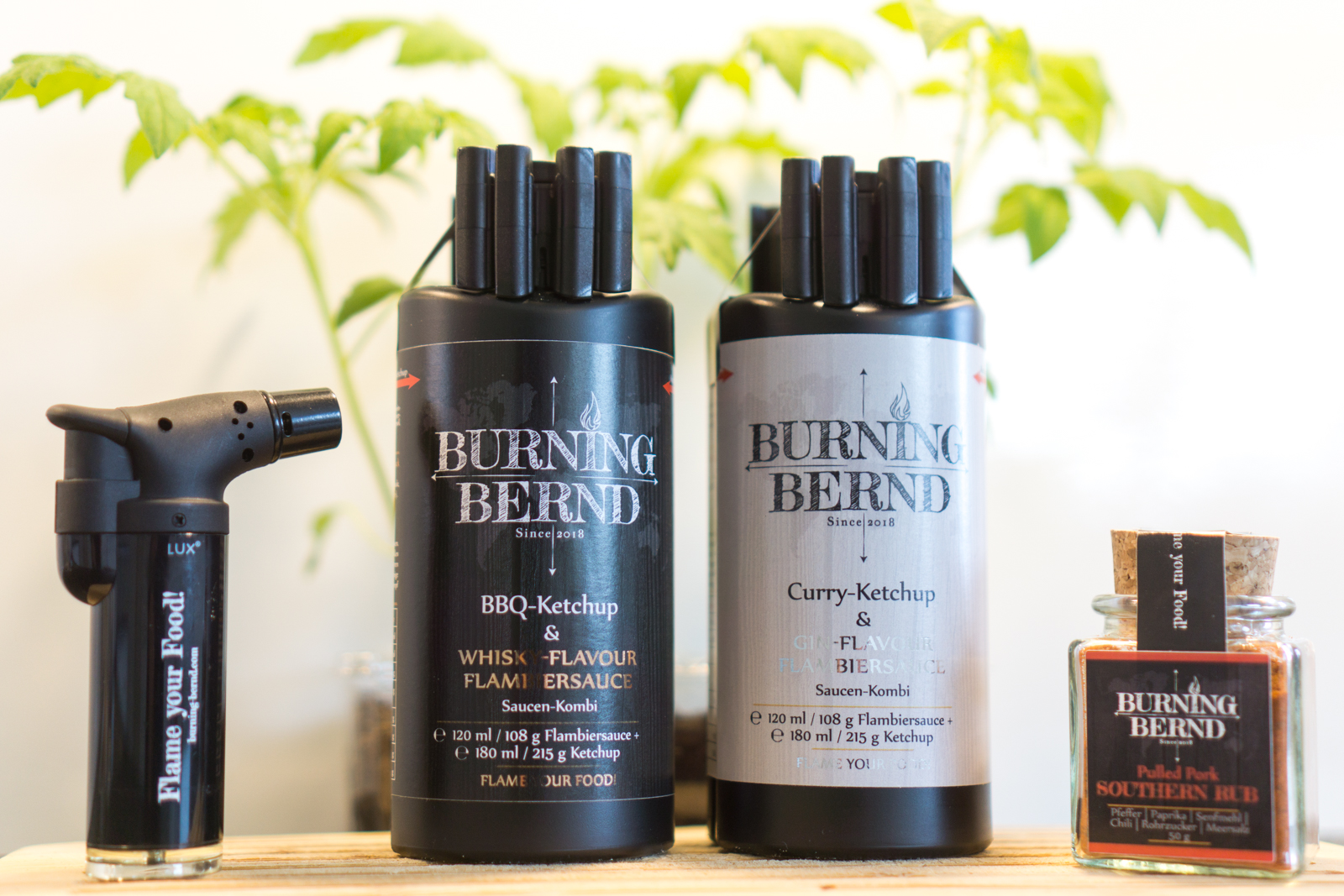 Accompanied by GIQS e.V., “Burning Bernd”, a novel food product, was launched on the market just in time for the start of the barbecue season. The innovative flambé ketchup was developed within the framework of the INTERREG V A project FOOD2020 in an innovation project with upstream feasibility study. GIQS, as FOOD2020 regional partner for NRW, was the contact for the lead partner Robert Meyer Catering GmbH from Gronau and Smart Material Printing B.V. from Enschede.

From the beginning of 2019 to autumn 2020, chefs and chemists worked together with food technicians from the DIL Deutsches Institut für Lebensmitteltechnik e.V. in Quakenbrück to develop a combustible ketchup in two flavours that can be dosed directly from headstand bottle using a two-chamber system and caramelises on grilled food, for example. The two flavours BBQ ketchup with whisky flavour and curry ketchup with gin flavour have been available on the Burning Bernd website and in local retail outlets since March 2021.

The event caterer and Vice President of the World Barbecue Association Robert Meyer and the chemist, inventor and GIQS member Prof. Gregor Luthe were in charge of the development of flambé ketchup and the innovative bottle. Both had already had the general feasibility of their product idea confirmed in a feasibility study during the first phase of FOOD2020. However, it was still a long way to the finished product. Particular challenges arose during product development with regard to the chemical and taste properties of the end product: the flammable ketchup should also be able to burn at refrigerator temperature and a beautiful and clear flame should be visible during the burning process – properties that the end product now also exhibits. Furthermore, legal questions had to be clarified and a corresponding marketing plan had to be developed before the market launch of the “ketchup from 18”.

In contrast to conventional flambéing of food, which is always a source of danger for deflagrations and therefore requires a lot of practice and experience, the use of Burning Bernd is conceivably simple – the burning ketchup is easy to use without much training and can even be used in mass production at public festivals where large quantities are needed and where production has to be done in high throughput. All you have to do is spread barbecue sauce and burning paste one after the other in a ratio of 3:1 over the barbecued food and then ignite the mixture with a standard lighter.

GIQS, in the person of project manager Tim Mäkelburg, was the regional FOOD2020 contact for the two partners Robert Meyer Catering and Smart Material Printing and had thus accompanied the entire project development from the beginning and coordinated the innovation project. “It was particularly exciting to witness how the original idea turned into the finished product and how many challenges, of which one had no idea at the beginning, were mastered by the project team in the course of product development,” says Tim Mäkelburg when he held the first filled bottle in his hands. “I particularly like the fact that the entire production of the burning ketchup and its packaging, including the bottling, is currently being done locally in the German-Dutch border region. This is completely in line with the underlying idea of the INTERREG funding,” the GIQS project manager continues.