Innovations in the prevention and control of animal diseases

The cross-border development and testing of effective tools for the prevention and control of animal diseases was the declared aim of the project ‘Risiken beherrschen’. German and Dutch actors from private and state institutions worked on joint problem solutions on the initiative of the Ministries of Agriculture of the Netherlands and North Rhine-Westphalia. The border area of both countries, with its high livestock density and diverse trade relations, is considered a contiguous risk area for animal diseases. This requires not only close coordination of the animal disease policy, which has so far been nationally oriented, but also a common approach to questions of prevention and control of animal diseases. 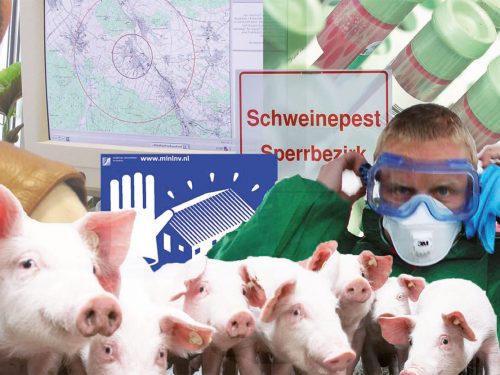 Animal diseases – including in particular foot-and-mouth disease (FMD), classical swine fever (CSF) and avian influenza (AI) – are rare but threatening events. In the event of a crisis, there can be considerable economic and competition policy consequences for the region directly affected and its trading partners around the world. The comparatively short outbreak of FMD in the Netherlands in 2001 left a total economic loss of around one billion euros.

The project tasks of the ‘Risiken beherrschen’ group were combined into a total of six different thematic packages under the headings of prevention and control. The aim of one of the work packages was to develop a new early warning system that accelerates the detection of pathogens and thus reduces the economic damage. Specifically, this involved a model for inter-company information management and a procedure for risk-oriented farm monitoring.

New strategies for cross-border animal disease control were formulated in work package 2. In close coordination between scientists from the universities in Wageningen and Bonn, they extend their simulation programmes for the economic impact assessment of animal disease outbreaks. From this, recommendations for action on the design of a German-Dutch control manual for classical swine fever can be derived. The political framework for an expansion of cross-border cooperation has been created. It is the prerequisite for the operational implementation of preventive measures in the daily processes of farmers, consultants, slaughter and processing companies and the responsible authorities and crisis committees.

Risiken beherrschen is carried out within the framework of the INTERREG III A programme Deutschland-Nederland and is co-financed by the European Regional Development Fund (ERDF), the Dutch Ministerie van Landbouw, Natuur en Voedselkwaliteit, the Ministeriums für Wirtschaft, Mittelstand und Energie des Landes Nordrhein-Westfalen and the Province of Limburg. It is accompanied by the programme management at the euregio rhein-maas-nord.