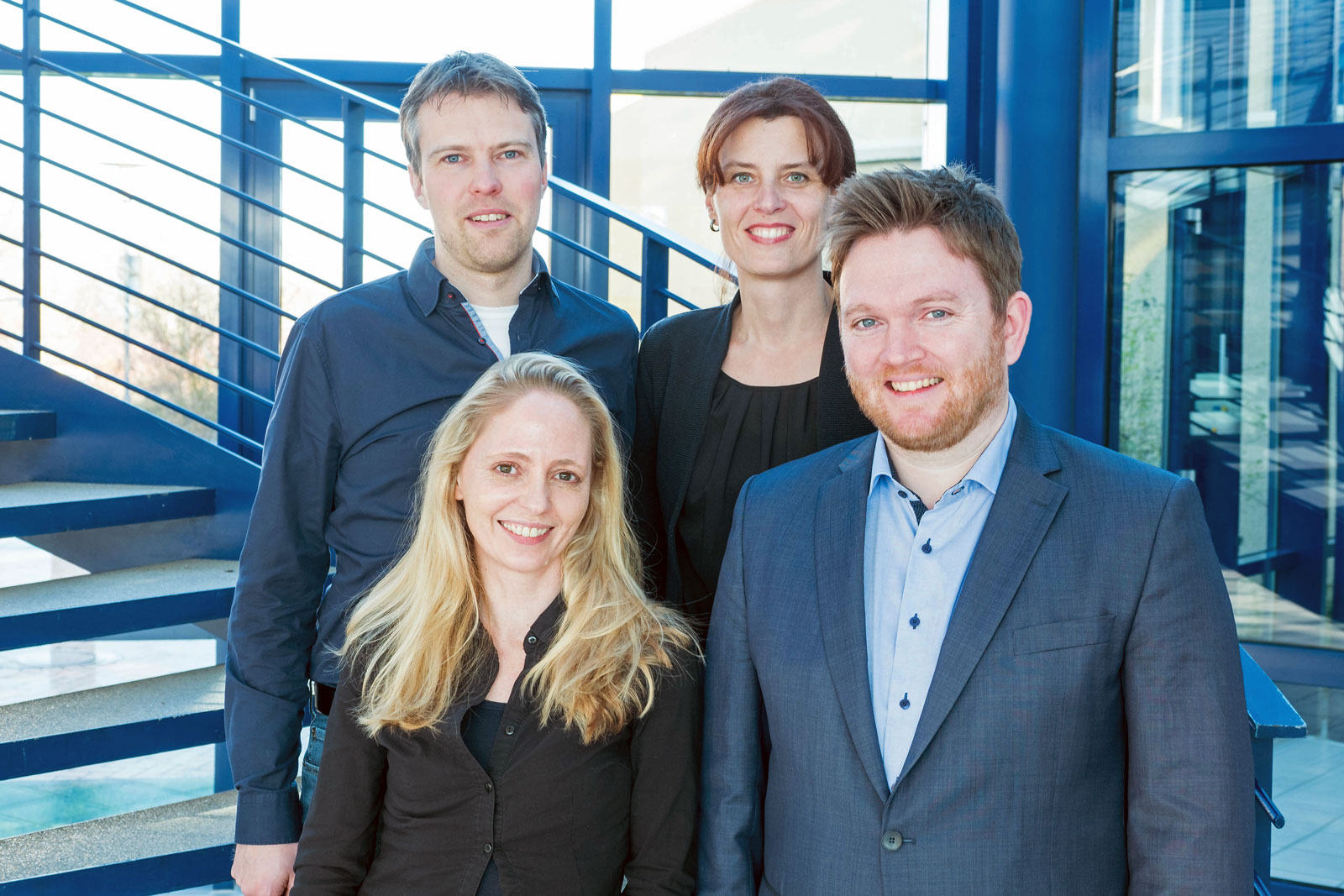 Four of the five employees of GIQS e.V. at the board headquarters in Rheinbach: Dr Tim Mäkelburg, Jasmin Lott, Karin Bril and Dr Oliver Breuer (from left to right). Missing: Dr Jana-Christina Gawron

The Interessengemeinschaft Grenzüberschreitende Integrierte Qualitätssicherung (GIQS) e.V. celebrates a round anniversary this year. It has been in existence for 20 years on 28 March 2021. At the end of 2000, GIQS was born out of a joint idea of the Universities of Bonn and Wageningen, which wanted to start a joint German-Dutch initiative for collaborative research in the agricultural and food sector. Since then, the non-profit association has initiated and carried out numerous (cross-border) projects and has continued to develop. Today GIQS is known in Germany and the Netherlands as an expert in cooperative agricultural, nutritional and environmental projects.

GIQS was founded in 2001 during the height of the BSE problem – one of the most threatening crises for the European agricultural and food industry. The agricultural faculties of the Universities of Bonn and Wageningen as well as business enterprises from the German-Dutch border region, the agricultural chambers and associations as well as provinces and districts were among the founders of the association. Since then, the association has been based in Kleve in the Lower Rhine region. For many years, the board office was attached to the Institute of Animal Sciences at the University of Bonn, but since 2016 it has been located in nearby Rheinbach. In total, GIQS is represented by four offices along the entire German-Dutch border: Rheinbach, Kleve, Gronau, Spiekeroog (from south to north).

Members of the association then as now are universities and scientific institutions, public authorities and professional organisations as well as companies along the food production chain from agriculture to retail, their upstream suppliers and service providers as well as interested private individuals. They all benefit from the 24 smaller and larger cooperation projects that GIQS has initiated or been involved in over the past 20 years. These included projects in funding programmes such as INTERREG A, INTERREG C, the EU Research Framework Programme, BMBF, BMELV, BMWi (ZIM-Nemo), EU Objective 2 programmes, BLE Innovation Programme and Landwirtschaftliche Rentenbank. The focus continues to be on cooperation projects between German and Dutch partners – most recently mainly in the INTERREG programme.

Thematically, the projects carried out over the past 20 years have always had a new focus. GIQS started in 2001 with the topic of quality management, then moved on to animal health in meat production (2003), crisis management (2005), animal diseases/zoonoses (2007), food safety (2009), modern crises (2011), the One Health strategy (2013) and finally research and development projects for companies in the border region (2015). With a newly formulated statute in 2017, the focus was then again shifted somewhat to the topic of stable climate and health from 2018 and the latest GIQS project TreeMania from 2020 on soil health on public green spaces.

The face of GIQS today consists of the project managers Dr Oliver Breuer, Dr Jana-Christina Gawron and Dr Tim Mäkelburg as well as the two administrative experts Karin Bril and Jasmin Lott. Parallel to this international team, Oliver Breuer and Tim Mäkelburg form the two-member executive board of the association, which together with the supervisory board, consisting of the chairperson Prof. em. Dr. Brigitte Petersen (EQA) as well as Dr. Helmut Saatkamp (Wageningen University) and Johan Zandbergen (ChainPoint B.V.), has its sights set on the medium and long-term further development of GIQS e.V.