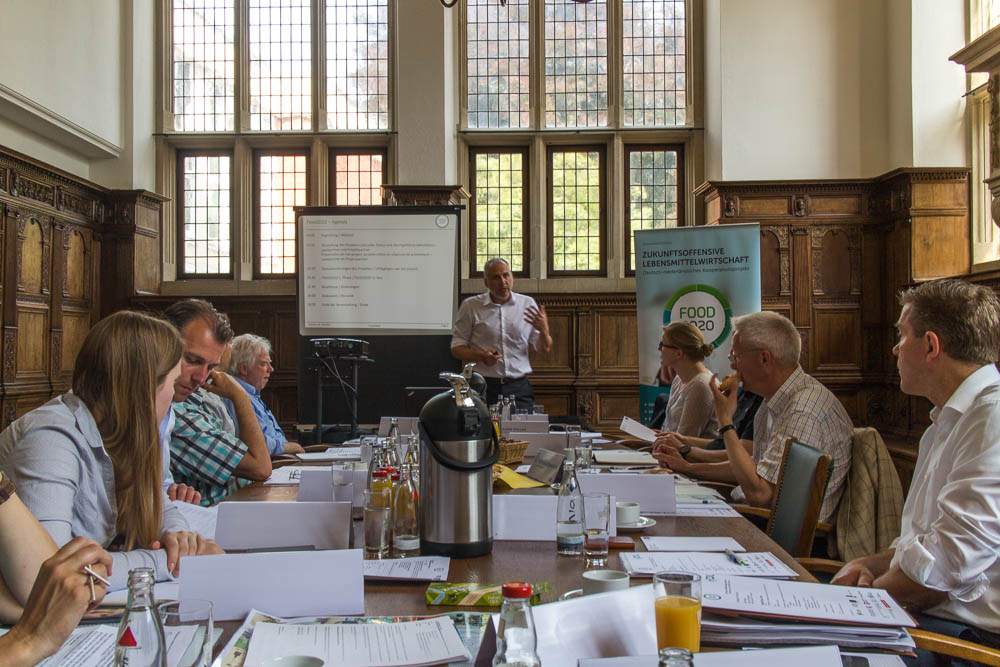 Meeting of the FOOD2020 steering committee at the end of May 2017 in the House of the Netherlands in Münster, Westphalia | Source: GIQS

At the beginning of August, the Ems Dollard Region (EDR) applied for a second project phase for the INTERREG V A project FOOD2020 – Zukunftsoffensive Lebensmittelwirtschaft. The successful German-Dutch cooperation project is thus to be continued from mid-2018. FOOD2020 is funded by the German Institute of Food Technology (DIL) in Quakenbrück as lead partner. GIQS e.V. assumes the role of a regional partner for North Rhine-Westphalia in the project.

FOOD2020 has set itself the goal of making the food industry in the German-Dutch border region fit for the year 2020 and strengthening its competitiveness. A number of initiatives, including a trainee ship programme, workshops, seminars, feasibility studies and innovation projects, have helped to promote numerous small and medium-sized enterprises in the food industry in recent months. In ten innovation projects, for example, many innovative services and products were created as a result of the funding: For example, a high-quality drying method was developed, products based on insects were manufactured, bio-based packaging films for food were developed or experiments were conducted with adapted plant cultivation in closed rooms using LED light sources.

These are just a few of the many examples presented at a meeting of project partners organised by GIQS with representatives of the FOOD2020 steering committee at the end of May in the House of the Netherlands in Münster. At the meeting representatives of the co-financing German federal states and Dutch provinces informed themselves about the results of the first project phase as well as the projects of the second project phase.

The second phase of FOOD2020 will focus on five social and societal challenges facing the food industry: food security, sustainable food, food safety, healthy food and social innovation. Concrete measures include innovation projects and accompanying measures for further education and training. New thematic think tanks will be added, in which small groups of specialists will work in several sessions to find solutions to a specific topic.

FOOD2020 is implemented within the INTERREG programme Deutschland-Nederland and is co-financed by the European Union, the Ministerium für Wirtschaft, Innovation, Digitalisierung und Energie of North Rhine-Westphalia, the Ministerium für Bundes- und Europaangelegenheiten und Regionale Entwicklung of Lower Saxony, the Dutch Ministerie van Economische Zaken en Klimaat and the provinces of Drenthe, Fryslân, Gelderland, Groningen, Limburg, Noord-Brabant and Overijssel. It is supported by the programme management of the Ems Dollart Region. Lead partner is the Deutsches Institut für Lebensmitteltechnik e.V. in Quakenbrück.