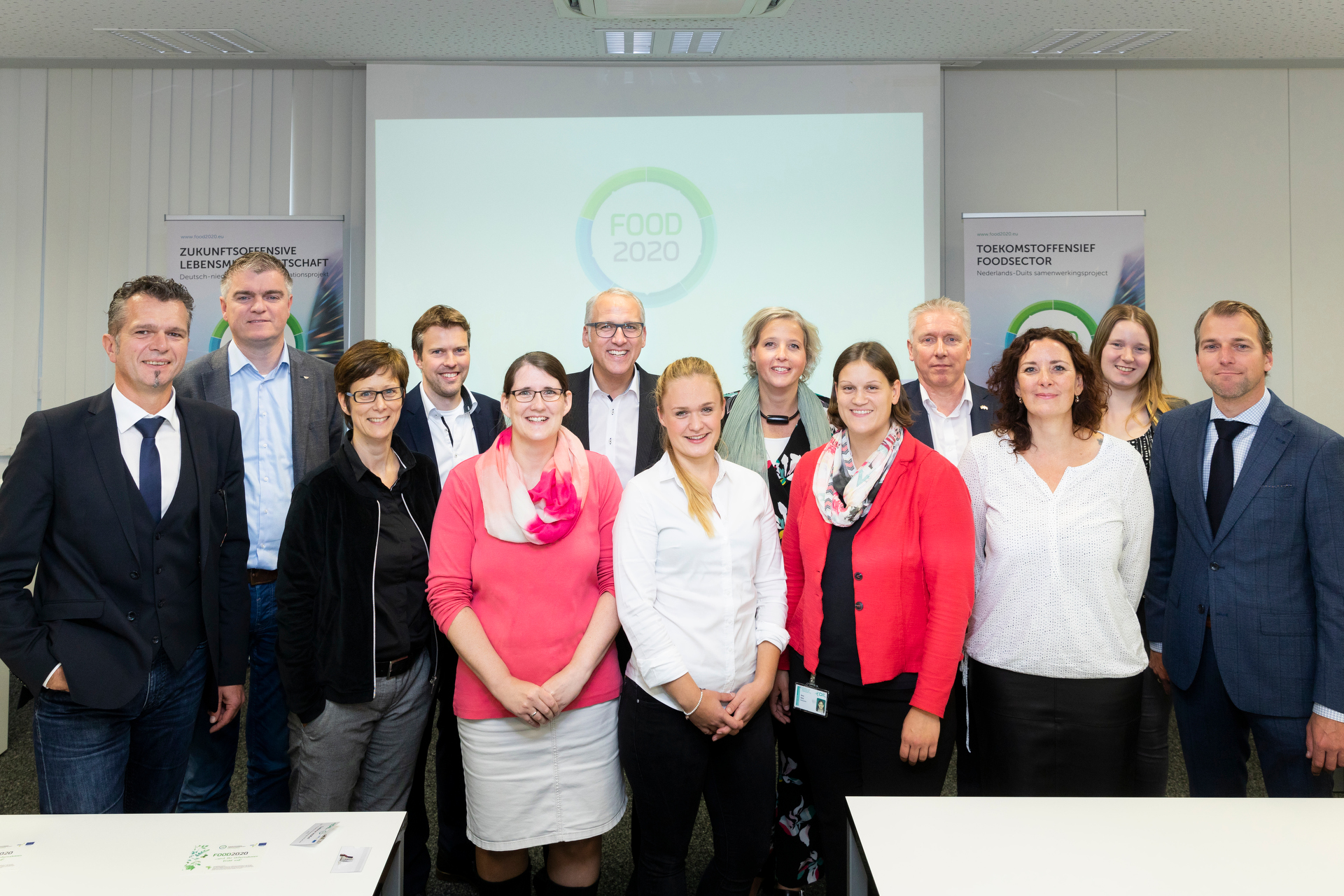 At the final event of FOOD2020 Phase I the starting signal for FOOD2020 Phase II at the German Institute of Food Technology (DIL) was given. More than 50 representatives from industry, politics and research came to Quakenbrück for the event. The cross-border character of the project was also reflected in the guest list: Besides the German ambassador in the Netherlands, Dirk Brengelmann, Max Krämer (Bugfoundation GmbH) presented as partner of a German-Dutch consortium an innovation project, which was successfully completed in the first phase of FOOD2020.

Project coordinator Christian Kircher (DIL e.V.) explained the megatrends and global challenges of the food industry and how FOOD2020 supports companies in implementing innovations. Phase I of FOOD2020 has been completed very successfully, 112 companies were able to develop new products or processes in innovation projects and feasibility studies, 452 companies were involved in FOOD2020 events and 5.2 million euros were donated to the German-Dutch border region. In a short film, five companies spoke about their experiences in the context of FOOD2020.

In the second phase of FOOD2020 there will be a complex of social and societal challenges. These challenges will be addressed in 19 innovation projects and seven think tanks, in which small groups of specialists will work on solutions to current and future challenges on specific topics in several sessions.

Max Krämer presented an already completed German-Dutch innovation project. In the first phase of FOOD2020, this project was clearly successful, including market entry into German supermarkets. “We had an idea to use insects as food, and this idea had a long way to go before it even became marketable. With FOOD2020 we were only able to develop a marketable product and therefore it was a jackpot for us,” Max Krämer stressed. “We would definitely recommend FOOD2020 because it is a cross-border project where you get to know partners beyond your own country’s borders and ultimately work together”. Afterwards some companies presented innovative products in the foyer, which were developed during the first phase.

The official starting signal for FOOD2020 Phase II has been given. Companies can now get advice on the potential of FOOD2020 for their company. The main topics of the project are “Food safety”, “Sustainable food”, “Food safety”, “Healthy food” and “Social innovations”.

The two-and-a-half-year project is coordinated by the DIL and carried out jointly with six partners from the German-Dutch border region. Project partners on the German side are DIL e.V., FPI – Food Processing Initiative e.V. and GIQS e.V. In the Netherlands, the business development agencies NOM, Oost NL, Liof – NV Industriebank and BOM are involved in the project.

FOOD2020 is implemented within the INTERREG programme Deutschland-Nederland and is co-financed by the European Union, the Ministerium für Wirtschaft, Innovation, Digitalisierung und Energie of North Rhine-Westphalia, the Ministerium für Bundes- und Europaangelegenheiten und Regionale Entwicklung of Lower Saxony, the Dutch Ministerie van Economische Zaken en Klimaat and the provinces of Drenthe, Fryslân, Gelderland, Groningen, Limburg, Noord-Brabant and Overijssel. It is supported by the programme management of the Ems Dollart Region. Lead partner is the Deutsches Institut für Lebensmitteltechnik e.V. in Quakenbrück.

Further information can be found in our project description and on the project website.