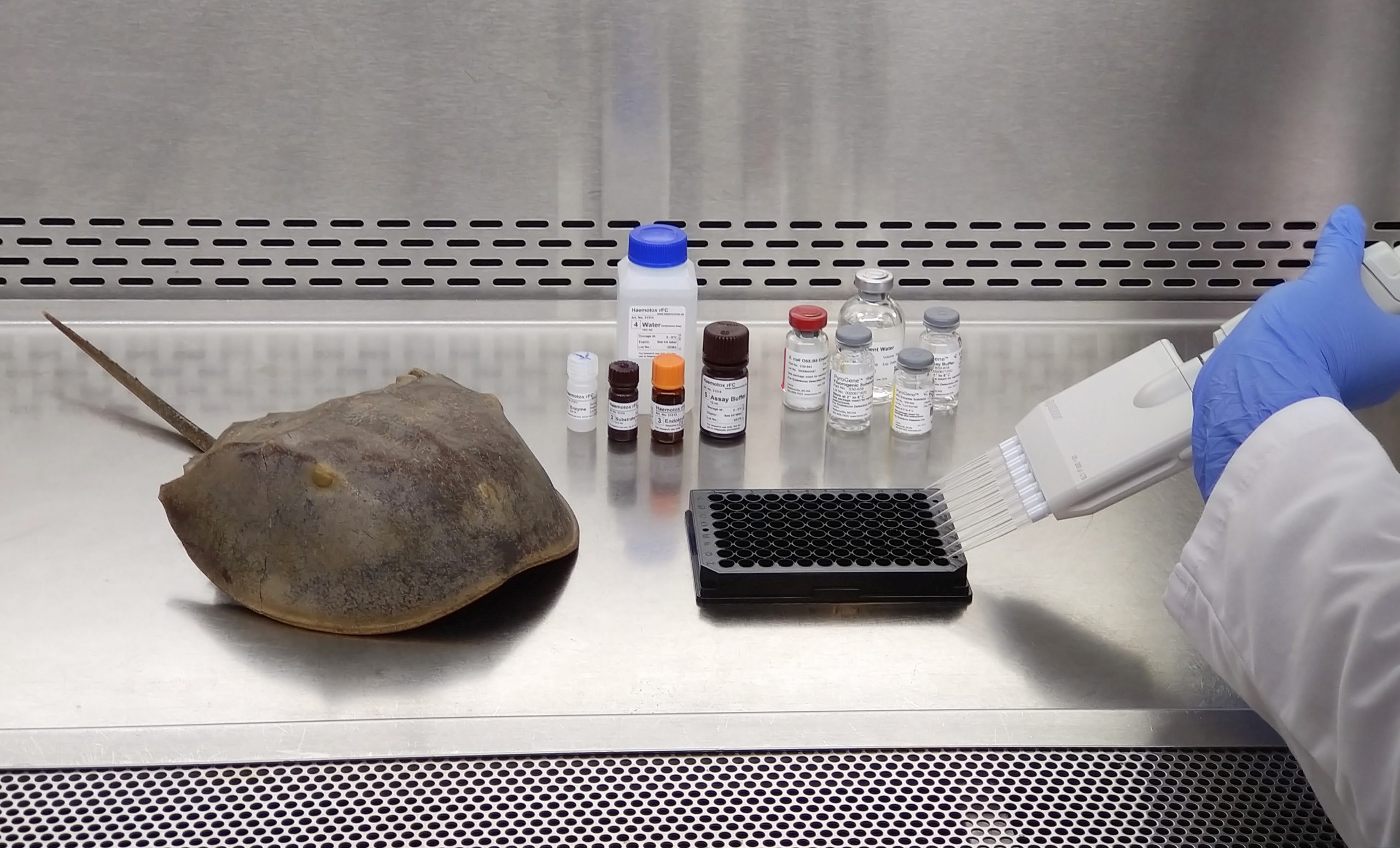 The horseshoe crab (Limulus polyphemus, left) is happy about recombinant alternatives for endotoxin determination (right), which were validated during the BEL AIR project in the Microbiology Laboratory in Münster. | Source: MiBiLab

Within the German-Dutch INTERREG project BEL AIR, in which solutions for clean and healthy air on poultry farms are being developed, numerous samples of air, water, litter or faeces were collected by the project partners and analysed for harmful endotoxins. For many years, the LAL test was the common method for analysing such samples for endotoxins. Within BEL AIR, however, a gentler, more sustainable and clearer analysis method has now been established with the rFC test – an important success for the German-Dutch cooperation project.

The abbreviation LAL in the analysis method commonly used so far stands for “Limulus amebocyte lysate”. The test is based on the blood of horseshoe crabs, which are, however, threatened with extinction worldwide. Besides problems regarding animal welfare, this test method is also not very sustainable, as animal populations are declining worldwide. Another disadvantage of the LAL test is that the sensitivity of the tests is always very dependent on the respective batch, as the blood is obtained from living animals and individual differences therefore play a role. When analysing with this test, there are also more problems with different interfering factors, which can complicate the interpretation of the results.

While the LAL test is based on a reaction cascade, the rFC test involves a single, determining reaction step. rFC stands for “recombinant factor C” and offers various advantages over the previous LAL standard. For example, the new analysis method is less susceptible to interference, animal-friendly and sustainable, as the test is produced recombinantly without animal blood. Its “single step” system also eliminates the reaction cascade and interfering substances have fewer targets.

“We have made an important contribution to new sustainable standards”.

The Mikrobiologische Labor Dr. Michael Lohmeyer (MiBiLab) from Münster in Westphalia was in charge of the analyses within the BEL AIR project. Until the results were available, the laboratory staff had analysed other air, feed and litter samples from tests carried out by the other project partners in German and Dutch poultry houses in parallel using both the LAL and the rFC methods. At the same time, MiBiLab was involved in a study together with a handful of other working groups to develop new VDI guidelines for endotoxin occurrence in workplaces.[i]

For MiBiLab and the other ten BEL AIR partners, the validation and establishment of the rFC test is an important result. “We are very proud that we were able to do our part to set new sustainable standards in the analysis of endotoxins and to gain experience in analytics in a wide variety of sample types,” says MiBiLab project manager Dr Rauni Kuczius, assessing the results achieved. Within the European Union, the rFC test has meanwhile also been included as an analytical method in the European Pharmacopoeia. “And a VDI regulation for air sampling and analysis at the workplace has also been drawn up. It states that the rFC test is the first choice for air measurement in the workplace,” adds MiBiLab project employee Dr Michael Larsen.