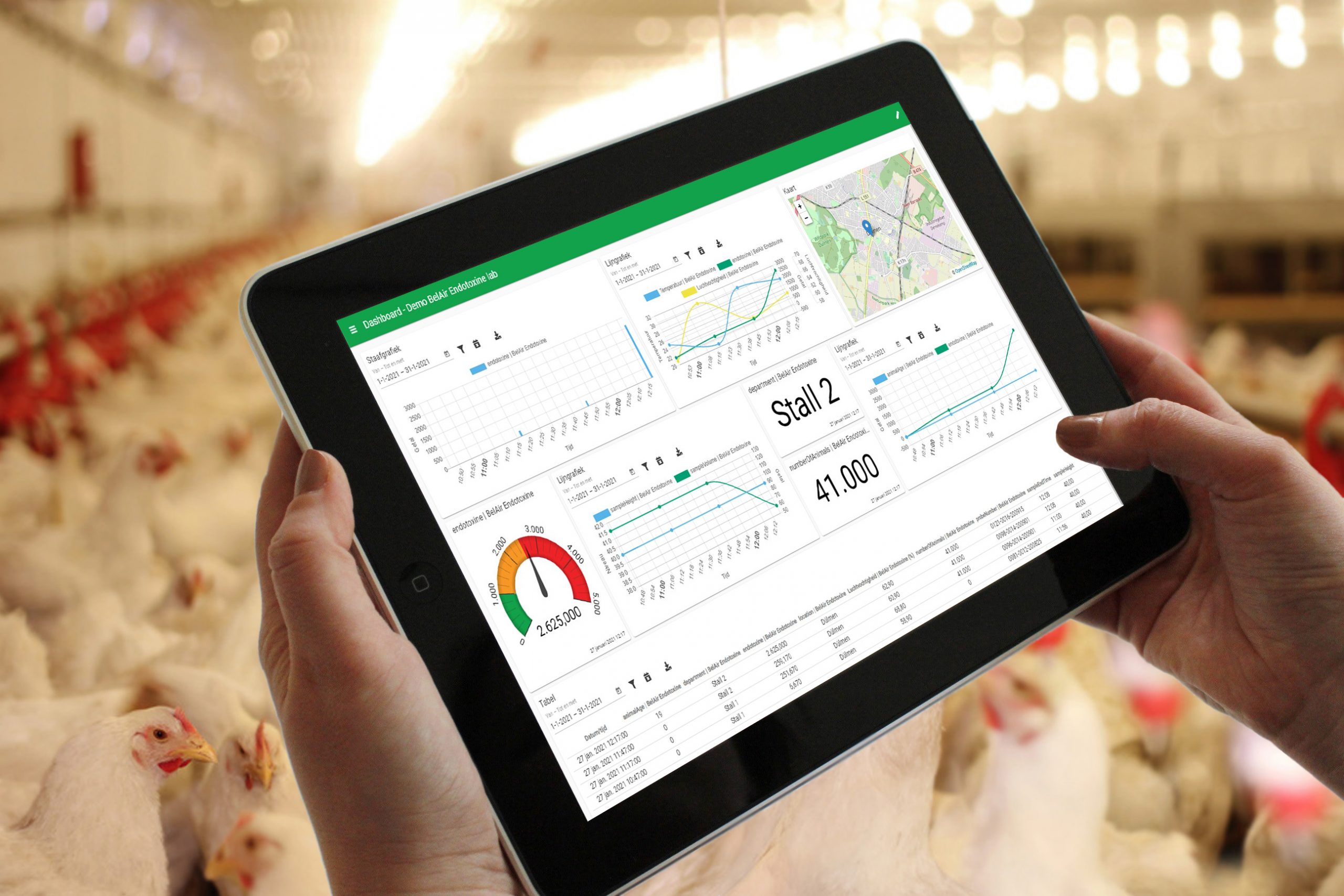 InWithin the German-Dutch INTERREG project BEL AIR, in which solutions for clean and healthy air in poultry farms are being developed, the eleven project partners carried out numerous sampling and air measurements and tested air purification technologies. In parallel, the project partner Whysor B.V. set up a data cloud into which all data measured in the project flow so that they can be better analysed and compared. The results of the measurements and sampling are visualised in a BEL AIR dashboard developed by Whysor, which makes it possible for each test barn to read directly via computer, tablet or smartphone what the current climate and air pollution in the barn is and how it is developing.

For this purpose, various sensors were installed in several test barns in the German-Dutch border area, networked and connected to the internet. All sensors functioned without any problems despite the high concentrations of particulate matter in poultry farms compared to other animal species. Values such as fine dust, temperature, ammonia, CO2, humidity and wind speed were measured – the latter was necessary for the interpretation of the fine dust sensor, as it was operated in a special wind tunnel. “As with other species, the sensors need to be hung out of reach of the animals. In the case of the broilers, this was several metres above the animals. Also – except for the fine dust measurement – it was not allowed to measure in the direct air flow of the incoming and outgoing air,” says project manager Imke Hermens from Whysor.

The dashboard gives farmers a whole new view of their barns

If the measured values turn out to be above average, this is directly indicated to the user by a red traffic light on the dashboard. The effects of the activities of the normal daily routine in the barn can thus be tracked live on the dashboard and – if necessary – appropriate measures can be taken: “On poultry farms, clear daily patterns can be recognised alongside those of an entire fattening cycle,” says Angela van der Sanden, expert in innovative barn systems and data analysis at BEL AIR partner DLV Advies. “This gives insight into the effects of certain activities within the barn – such as mucking out or adjusting to the ventilation system – on the barn climate as well as particulate matter and endotoxin levels,” van der Sanden continues. Problems can thus be quickly located and addressed by looking at the graphically and practically prepared data.

The architecture behind the dashboard and cloud, which was programmed by Whysor and developed with other partners such as DLV Advies, is called “Smart Barn” and has been further developed in other projects besides BEL AIR, such as Food Pro-tec-ts (here specifically for pig houses). The special feature of the BEL AIR project was the integration of endotoxin measurements into the dashboard. The sampling and analysis of endotoxin samples to measure the endotoxin load in the stables, which is carried out by random sampling, cannot be done live compared to the other values and therefore only appears in the dashboard with some delay. This originally analogue process, which was done on paper, has now been digitised in BEL AIR. Whysor has developed two apps for this – one for calibrating the sensors and one for sampling, where measured values and boundary conditions can be recorded during the measurement moment. The values are then also transmitted to the BEL AIR cloud and also help to identify a possible link between the endotoxin values and the measured values of the other sensors.