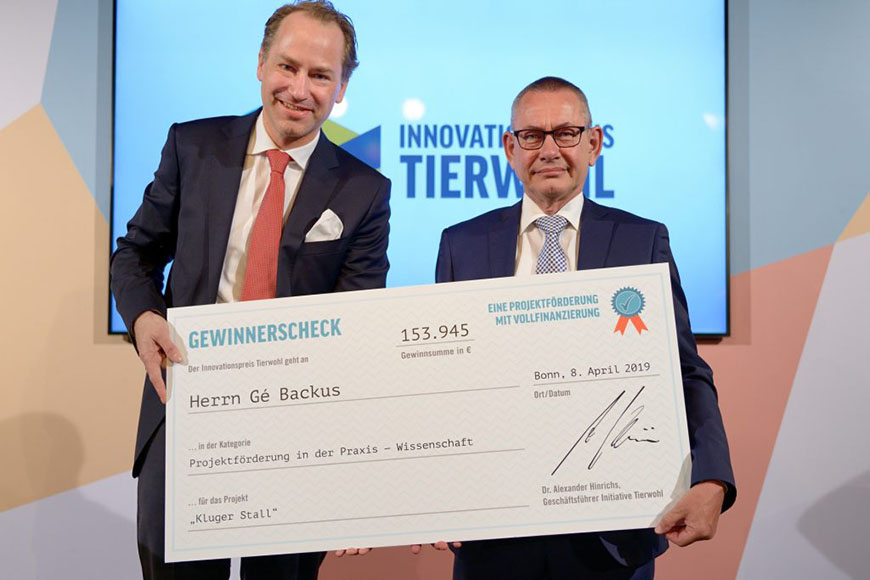 Dr. Gé Backus (right) at the award ceremony of the Innovation Prize of the Animal Welfare Initiative | Source: Initiative Tierwohl

As part of the Animal Welfare Initiative, the Innovation Prize 2019 was awarded in Berlin at the beginning of April in the presence of Federal Minister of Agriculture Julia Klöckner. GIQS project partner Gé Backus from the Dutch company DLV Intensief Advies was one of the four winners to receive financial support. DLV was able to convince the jury with its pilot project “Slimme Stal” and received project funding of EUR 153,945 with full financing in order to test the marketable technology in practice for the first time in Germany with 30 participants starting in July.

This year for the first time, the Animal Welfare Initiative had awarded the Animal Welfare Innovation Prize to innovative ideas and projects relating to pig and poultry farming. The GIQS team is very pleased that the “Slimme Stal” concept developed jointly by DLV subsidiary Connecting Agri & Food and software company Whysor is now being rewarded for its commitment. Both companies are involved in the ongoing GIQS projects Food Pro·tec·ts and BEL AIR (both INTERREG V A), in which parts of “Slimme Stal” were developed together with German partners.

The aim of “Slimme Stal” is to use modern tools to convey the pig farmers’ understanding of the climate in the stables and to help them avoid mistakes in the climate control of their stables in the future. “In my conversations, I noticed that many farmers are not exactly aware of the importance of a good stable climate. The climate has a great influence on the behaviour of pigs and their health. With our system, we want to provide farmers with a tool that makes it easier for them to monitor the necessary benchmarks,” says Gé Backus, explaining his motivation for the project.

In order to assess the climate in a pigsty, four guide values are decisive: in addition to temperature and humidity, the carbon dioxide content (CO2) and the ammonia content (NH3). An important side-effect of an optimal climate is that the lower stress level on the animals reduces the likelihood of problems such as tail biting.

View at any time via smartphone, tablet or PC

With the help of “Slimme Stal” it is possible for pet owners to gain insight into the climatic conditions of the stables at any time and, if necessary, to become active. For this purpose, sensors are first installed in the stables, which send measured values to the “Slimme Stal” dashboard every ten minutes. If individually defined threshold values are exceeded, the farmer receives a notification on his smartphone and can thus recognize current extreme situations and react directly to them.

The projects Food Pro·tec·ts and BEL AIR are implemented under the INTERREG V A programme Deutschland-Nederland and co-financed by the European Regional Development Fund (ERDF) and the Dutch Ministry of Economic Affairs, MWIDE NRW and the provinces of Gelderland, Limburg and Noord-Brabant. It is accompanied by the programme management of the Euregio Rhein-Waal.

For further information on “Slimme Stal”, which is also to be adapted for poultry and dairy farming, see www.slimmestal.nl.