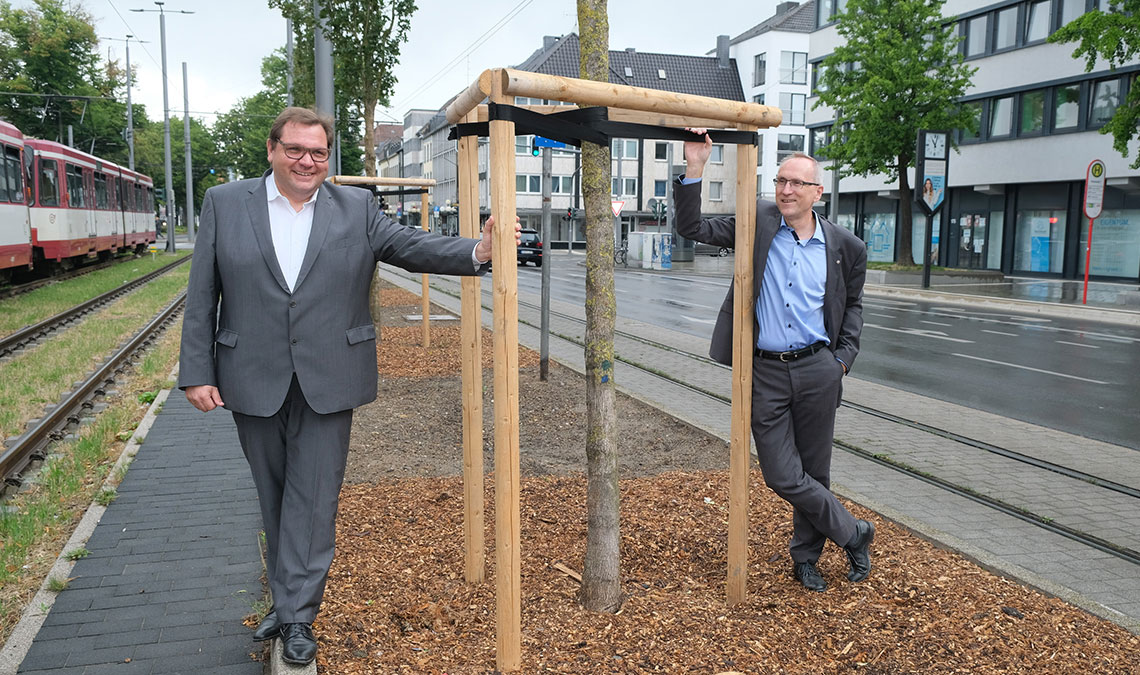 Mayor Frank Meyer and KBK Board member Helmut Döpcke at one of the trees from the TreeMania project | Source: Stadt Krefeld, Presse und Kommunikation, L. Strücken

Kommunalbetrieb Krefeld (KBK) is participating on behalf of the city of Krefeld in the TreeMania research project funded by the European Union. KBK Executive Board member Helmut Döpcke, together with KBK Board member Mayor Frank Meyer, presented the INTERREG project, which is being implemented by twelve partners from the German-Dutch border region.

The aim is to improve the living and growth conditions of trees, especially in inner-city locations. In view of the noticeable climate changes with hot and extremely dry months still to be expected, the trees will have to overcome further difficulties in addition to the already difficult conditions in order to survive in the urban area. Therefore the living conditions for the trees are to be improved. To this end, the KBK is now using digital technologies and sensor systems to research better site conditions and new irrigation concepts.

Krefeld’s mayor Frank Meyer explained why this effort is worthwhile and important: “With the trees, nature becomes visible and tangible for us. They are very special companions of man and contribute to a feeling of well-being, especially in the city centre, among other things by improving the air quality. With the trees, we are also making a contribution to climate protection and the design of a green cityscape in the city centre and in the districts”.

Helmut Döpcke explained the four different Krefeld locations of the TreeMania project, which is scheduled to run for two and a half years. The first comprises four new field maple trees on the central reservation of the east rampart at the level of the terminal stop of the K-Bahn. Here, the soil was elaborately prepared prior to replanting and equipped with sensors that provide information on the aeration of the soil and the water balance in the root area.

The second project will take place on Rheinstraße between Dionysiuskirche and Ostwall. Here a solution is to be found for the existing amber trees, whose roots grow very high. Therefore a suitable modification for the tree discs has to be found, which allows the preservation of the trees but also prevents stumbling spots for passers-by.

Another project that deals with root growth is planned for the city promenade between Zur Feuerwache and Trift. Here, special attention will be paid to special soil and tree substrate for the new plantings. New plantings will also be made on the Platz der Wiedervereinigung as part of the redevelopment of the square. In addition, a new irrigation system is being tested there for suitability.

The results of these research projects support the hopes of being able to better influence the preservation of trees in the urban area in the future. In 2019 alone, 424 trees had to be felled, many of which fell victim to the drought. With 482 tree plantations in the city area in parks and green areas, but also as street trees, the municipal company has now provided more new fresh greenery this year on behalf of the city administration. In many cases they were replanted in places where trees had previously had to be felled. To ensure that the trees, which are around five to seven metres high and around twelve to fifteen years old at the time of planting, do not suffer the same fate as their predecessors, the planting locations were prepared accordingly. For an inner-city tree, this can result in costs in the mid-figure range.

TreeMania is implemented under the INTERREG V A programme Deutschland-Nederland and co-financed by the European Regional Development Fund (ERDF) and the Ministerium für Wirtschaft, Innovation, Digitalisierung und Energie NRW and and the provinces of Gelderland and Limburg. It is accompanied by the programme management of the euregio rhein-maas-nord.